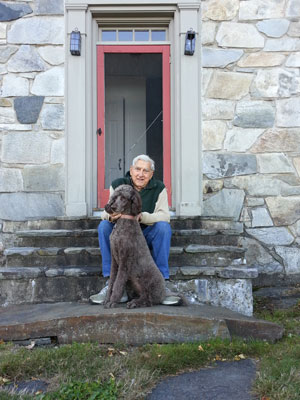 At the top of Town Hill Road in Reading there is an oasis called High Meadows Farm. George and Harriet Wiswell’s 300 acres began as a rustic winter retreat for their family. After discovering the pure fun of skiing at Suicide Six in the 1960’s, they purchased 150 acres of raw land with the help of their new friend, Roger Maher, a GMHA founding father. They plunked a cabin on the land and retreated there from their home in Connecticut for winter recreation. As their 3 sons grew, so did the house. Years later, they purchased the neighboring farm, doubling the size of their property and moving into the 100 year-old farmhouse. The old Stage Road, now known as Rich Trail, runs down the property boundary. It is a major artery for equestrian travel and a part of the GMHA 100-mile trail.

Since owning the property, the Wiswell’s have added a network of trails through their fields and forests that connect to a system of neighborhood riding trails.

“We’re not horse people,” says George Wiswell. “We just enjoy seeing them and we have so many neighbors and friends who are horse people. Horseback riding and GMHA are part of the fabric of life up here. We never want to see it end.”

The trails through the Wiswell’s farm began when one of their sons took up Nordic skiing in high school. George made the trails for his son and his classmates and then he and Harriet took up Nordic skiing as well. “At that time,” says Harriet. “We had a period of very snowy winters. We would pack a lunch and ski all the way to South Woodstock and back. We had snowmobiles as well, and we would travel all over the hills with our friends.” George recounted tales of sledding parties that ran straight down Town Hill Road with a snowmobile-powered tow to the top.

Through the 60’s, 70’s, and 80’s, High Meadows Farm was rented to horse people in the summer as the Wiswell’s chose to spend their summers sailing off the North Shore of Massachusetts. “At that time, many of our friends from Glastonbury, Connecticut participated in Pony Club. GMHA was their summer headquarters, so the hills were filled with kids and their ponies,” says Harriet.

As their sons grew, George and Harriet became more interested in living and learning in rural Vermont, spending more time at High Meadows. One son learned about sugaring while at Middlebury College, and George began helping out at the neighboring Jenne Farm. Soon they had a sugarhouse and a few hundred tapped trees. Now, their sugaring operation has 10,000 taps and is managed by Green Mountain Sugar House. There was a foray into sheep farming, but that only lasted a few years. Most of the Wiswell’s land is productive managed forest. They have enjoyed learning about forest stewardship and managing the resources of the forest, including the trails.

Although their sons are grown and have children and now grandchildren of their own, High Meadow Farm continues to be their oasis. Every year, they enjoy Thanksgiving together at the farm. George and Harriet spend more time here in the summers now, in the midst of the place where they have so many rich memories of family, neighbors, and friends. When health permits, they enjoy venturing out to see the horses, meet new faces, and learn something new.